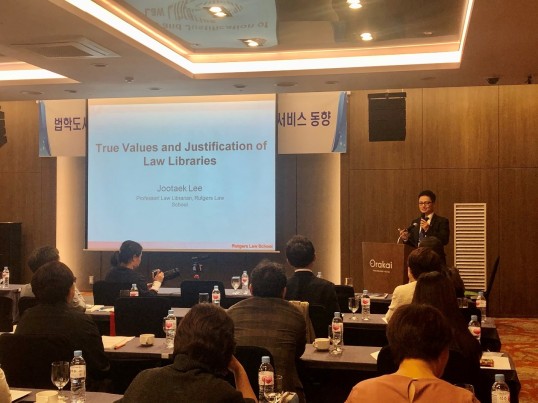 On October 24, 2019, I was honored to be invited and speak as a keynote speaker for the Korean Association of Law Libraries (“KALL”) and the National Assembly Library in Songdo, Korea.  Songdo, located in the west of Seoul about an hour and half by subway, is a newly developed international business district. Among the 28 member libraries all of which are academic law libraries, Yonsei University is the chair and secretary institution this year, and its new innovative campus is located in Songo. The KALL was organized in November, 2008 just before the launch of the current law school system in March, 2009.  Through the KALL, Korean law libraries have been cooperating in an organized way and making efforts to increase quality of service. The National Assembly Library also participates in this seminar and shares information. Every year KALL hosts a seminar where law libraries share issues and trends of law library services.

Uniquely, this year, speakers from the U.S., China, Japan and various vendors providing services in Korea were invited. I was able to present my new article, “True Values and Justification of Law Libraries: Application of U.S. Law Library Values to Law Libraries in Korea” and introduce the American law library system and its services. Sangmo Lee, who received a PhD from a Chinese law school and researched at the Korean Legislative Research Institute, introduced the Chinese legal system and information services with extensive 120 pages of PowerPoint slides. In addition to a wide variety of primary and secondary sources in print, he introduced the famous ChinaLawInfo (http://www.Pkulaw.cu); I could see how well this database is appreciated in Korea.  He also introduced http://www.lawyee.net; https://www.chinacourt.org/index.shtml; and http://www.npc.gov.ch  for primary sources. As many of us know, he also introduced http://www.cnki.net; http://old.g.wanfangdata.com.cn/; and http://journal.chinalawinfo.com/index.asp for journals, and http://rmfyb.chinacourt.org/paper/html/2019-10/13/node_2.htm;  http://www.legaldaily.com; http://newspaper.jcrb.com; http://www.peoople.com.cn for newspaper articles.

A Japanese speaker, Kazuyuk Yamasawa, is from the TKC Law Library (https://www.tkc.jp/law/lawlibrary) which I became recently familiar with.  An interpreter clearly translated what he spoke into Korean. He introduced his company’s database, which allegedly covers most cases and laws, and at least 60 journals. He emphasized that 55 law schools and 21,500 users are currently using the database.  Representatives from Lexis Advance and LawnB, which was acquired by Thomson Reuters, also introduced their recent developments.

This two-day conference and seminar were well prepared and organized.  For the last ten years, the law libraries in Korea have developed tremendously in terms of collection, services and values. Under structural and legal challenges and restraints, law librarians are providing high quality services to their patrons. Once again, I appreciated the invitation and was very pleased to speak at the seminar. 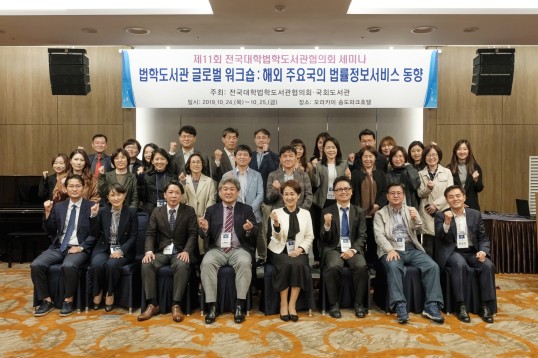